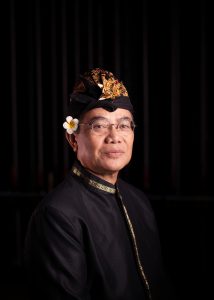 I Made Lasmawan
Balinese drummer and composer I Made Lasmawan was born in the village of Bangah, in the Baturiti region of the regency of Tabanan, Bali in 1958. Strongly influenced by his family and involved in the arts since childhood, he entered KOKAR (Conservatory for Traditional Performing Arts) in Denpasar, Bali, and graduated in 1977. He continued his studies in 1978 at STSI (Indonesian College of the Arts) in Surakarta (Solo), Central Java, and studied traditional Javanese music, receiving his Traditional Indonesian Music degree in 1983.

Pak Lasmawan has since traveled throughout the world, including Belgium, France, England, Singapore, Japan, and Mexico. He is a prolific composer who taught Balinese music at STSI from 1983 until 1990, when he was invited to San Diego State University to teach Javanese and Balinese music. Living in Colorado since 1993 as Artist-in Residence with Gamelan Tunas Mekar, Pak Lasmawan is a Lecturer at Colorado College where he directs their gamelan ensembles and teaches courses on Balinese and Indonesian music and Hindu epics in music. He also directs gamelan ensembles at Metropolitan State University of Denver, the University of Colorado, Boulder, the University of Wyoming in Laramie, and throughout the Rocky Mountains. He regularly performs as a guest artist and director with university and college gamelans across the United States. Pak Lasmawan plays a leading role in both Bali and the US as the founder and director of Sanggar Manik Galih, developing community gamelan groups for Balinese, diasporic Indonesians, and Westerners.

Pak Lasmawan is accompanied in the United States by his wife, Ni Ketut Marni, and his sons, I Putu Tangkas Adi Hiranmayena, I Made Tangkas Ade Wijaya, and I Nyoman Tangkas Aji Guyasa. 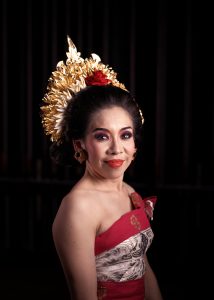 Ni Ketut Marni
Ni Ketut Marni was born in the village of village of Kebon in the town of Singapadu, district of Gianyar, Bali. Born into a family of traditional dancers and musicians, Ni Ketut has studied Balinese dance from a very young age. She graduated from SMKI, the Traditional School of Performing Arts in Denpasar, Bali with a major in Dance, and has performed for TVRI (Television of the Republic of Indonesia). She first performed with Gamelan Tunas Mekar at the Bali Arts Festival in Denpasar in 1996. Ni Ketut teaches with her husband Pak Made and resides with him in Colorado Springs, Colorado where she instructs the Colorado College Gamelan Tunjung Sari dance program. She has performed Balinese and Javanese dance in Indonesia, Taiwan, Japan, and the United States, and directs the Balinese dance program for Sanggar Manik Galih. 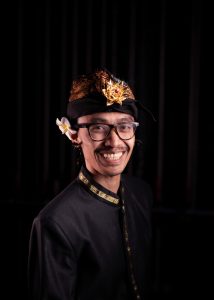 I Putu Tangkas Adi Hiranmayena
Putu is an Indonesian artist-scholar born in Surakarta, Java, Indonesia. His scholarly research, performance practices, and compositional methods interrogate discursive conceptions of noise through the lenses of politics, indigeneity, environmentalism, and performance. He holds degrees from the University of Colorado, Colorado Springs and the University of California, San Diego. Putu has presented works internationally and currently holds teaching positions at MSU Denver and UCCS, along with cultural consultation work across the United States. He is the co-founder of PAK Yeh improvisation trio; Three-Corpse Pile-Driver noise band; and ghOstMiSt. You can read his publications and view his works online and social media platforms: @91ghost_mist89, thecollective.us, sanggarmanikgalih.org

In his free time, Putu enjoys wheeled sports, tennis, and the aromatic presence of lemon-lavender. 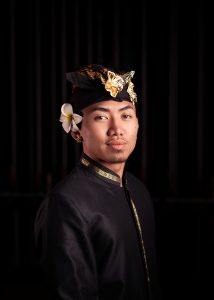 I Made Tangkas Ade Wijaya
Ade was born in Denver, Colorado in 1999. Currently completing a double major in Criminology and Cultural Anthropology at the University of Denver, he plans to continue his studies by pursuing a graduate degree in Criminology. He is an avid soccer player, a pianist, a jazz drummer, and a skilled Balinese gamelan musician, composer, and dancer. Ade’s composition style is inspired by his teachers – academic, athletic, and “social.” In particular, he looks up to the strong traditional musical styles of Pak Wayan Beratha, Pak Nyoman Windha, and most certainly his father, Pak Made Lasmawan. 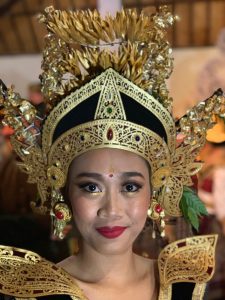 Dewa Ayu Eka Putri
Dewa Ayu Eka Putri is an artist-anthropologist and is currently a dance instructor at the critically acclaimed arts organization, Sanggar Cudamani. She received her B.A. from Universitas Udayana in cultural anthropology and is a leading figure in women’s gamelan ensembles all around Bali. Born into a family of artists, Dewa Ayu is internationally known for her collaborations of traditional and contemporary works in theater, music, and dance while actively working as a freelance research assistant. The majority of her work advocates for the legal protection of women and children which is highlighted in various discursive artistic modalities.