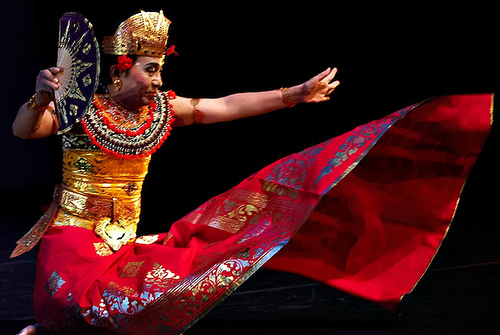 Gamelan Tunas Mekar, under the direction of artist-in-residence I Made Lasmawan, will present a performance of the music and dance of Bali, Indonesia with every special guest dancers I Made Bandem and his wife, Ni Luh Nesa Swasti Wijaya Bandem. Dr. Bandem and his wife are internationally renowned dancers and choreographers who will be joined by Colorado dancer and instructor Ni Ketut Marni, and students from her studio.

Now in its twenty-seventh year as a local community educational and performing group, Tunas Mekar will perform music on two Balinese orchestras, the ancient sacred gamelan angklung, and the modern gamelan semaradana, on the stage at Foote Hall, with a theatrical set created by master painter I Made Sumayasa. This performance will offer an opportunity for the Denver audience to experience a variety of gamelan styles, including the fiery music known in Bali as “gong kebyar,” and to experience Balinese dance as presented by two of the leading artists of their generation.

In 1974, Colorado Women’s College wrote and received a grant to obtain a Balinese gamelan for its music department. Ultimately, Pak Bandem was the one who located a beautiful set of old, unused instruments — from the region of Karangasem — that could be repaired and eventually shipped to CWC. The first class of Balinese gamelan instruction began at CWC in 1976, and the first concert was performed, on the same stage as this performance, at the then Houston Fine Arts Center.

However, that’s not the only connection to this famous artist. Tunas Mekar participated, by invitation of the Governor of Bali, at the 1996 International Bali Arts Festival in Denpasar. It was Pak Bandem who personally presented Tunas Mekar with a hand-carved Garuda (mythical bird) statue and a presenter’s award, not even realizing that he was instrumental to “Gamelan Tunas Mekar’s” existence. Thirty-nine years later, those same instruments, on the same stage (now Denver School of the Arts) will be featured in a concert with Pak Bandem as guest dancer. As well, his wife’s choreographed piece, Puspanjali will be featured on the original angklung orchestra that he shipped to Colorado so many years ago!

This is a concert not to be missed — its history is rich; its music and dance mesmerizing.

All tickets are General Admission.

If you purchased tickets in advance, they will be available at Will Call. Go to the “Advance Purchase” line.

See Events Archive for a list of our past concerts and events.

All tickets are General Admission.

If you purchased tickets in advance, they will be available at Will Call. Go to the “Advance Purchase” line.