Description Of The Music Of The Balinese Gamelan

HomeThe Power of Community: Documenting 25 Years of an American Gamelan EnsembleDescription Of The Music Of The Balinese Gamelan

Bronze-making technology made its way from China into the coastal zones and island chains of Southeast Asia about seventeen centuries ago.  It was forged into a variety of objects, including musical gongs.  Percussion orchestras built around these gongs exist throughout the region today, but the term ‘gamelan’ refers specifically to those found on the islands of Java and Bali, in the modern Republic Of Indonesia.  ‘Gamelan’ comes from ‘gambel,’ which is an ancient word in Kawi, a language derived from Sanskrit.  The original meaning was ‘to hammer,’ but over time it has come to refer to playing music.

One of the oldest forms of Balinese gamelan is the gamelan gambuh, which consists of rhythmic and cyclic gongs, a pair of two-headed drums called kendang, and four bamboo flutes called suling.  Although there are only a handful of groups performing this style today, it was the prevalent form until the 15th century AD, when the Hindu Royal Courts of the Majapahit Empire on neighboring Java retreated to Bali before the expansion of Islam.  With the rise of nine separate Kingdoms on the island, music became the province of the Kings and their Courts.  The addition of bronze metallophones produced a variety of new styles, notably the sacred ceremonial angklung, the shadow play accompanying gender wayang, and the king’s ‘love-making’ orchestra, the semar pegulingan.   For hundreds of years, gamelans and musicians were consolidated under Royal ownership.  In the beginning of the 20th century, a series of military invasions of the island by the Dutch government caused the decline and eventual fall of the Balinese Royal Houses.  Around 1911, a new form of gamelan called gong kebyar emerged out of the northern part of Bali. This new playing style, the name for which means ‘to burst into flame,’ soon spread throughout the villages as old palace gamelans were melted down and recast.  Gong kebyar became known for its dramatic fluctuations in tempo and volume, and it promoted exciting new choreographies from the culture’s leading dancers.

In the last decade of the twentieth century, a practical innovation in gamelan building resulted in the gamelan semaradana, a large orchestra that combines different tuning systems and enables the playing of several styles on one orchestra. 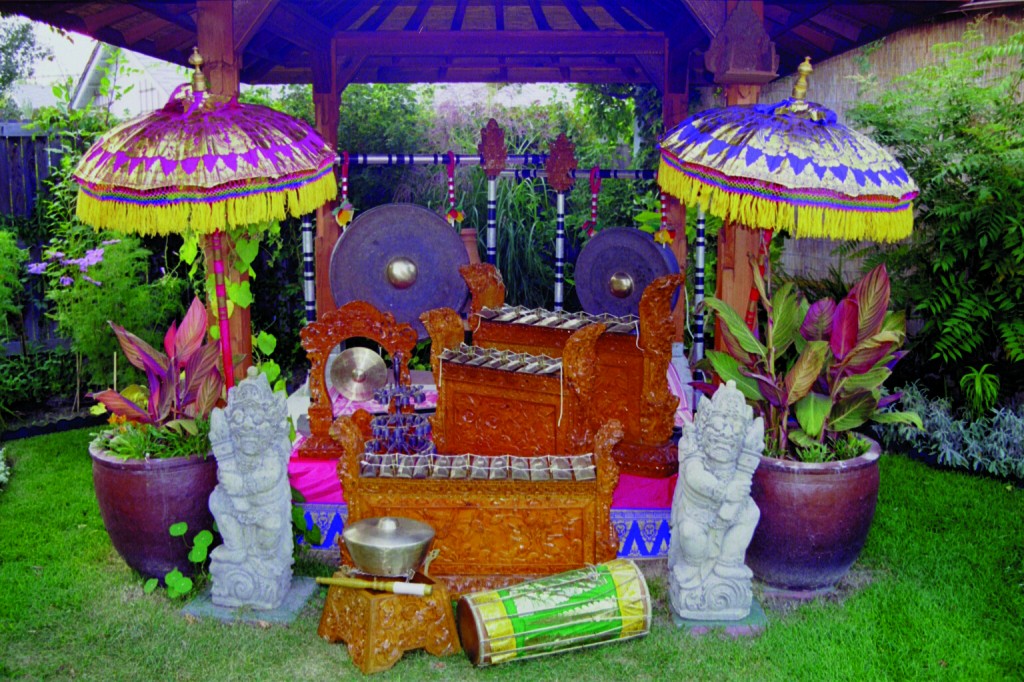 Balinese gamelan incorporates two features not found in other Southeast Asian percussion orchestras.  The first involves dividing a melodic line or embellishment into two parts.  These parts must be played together by pairs of musicians in order to produce the entire line, a technique called kotekan.  This style of playing calls for a high level of cooperation between the players, but when mastered it permits faster tempos than most other musical forms can produce.  The second feature involves tuning.  There is no ‘standard’ tuning for Balinese gamelans.  They are built in tune with their own gongs, and an instrument from one village gamelan cannot be played with another.  Within a particular gamelan, there is also a purposeful detuning of notes produced by pairs of instruments.  This results in a characteristic ‘vibration’ in the sound waves, a natural phenomenon related to electronic ‘phase shifting.’   Gamelans exist today in great numbers throughout Bali, and are a vital part of both secular and spiritual village life.  This ancient musical form, performed acoustically in mainly outdoor settings on instruments created by hand, remains crucial to the modern Balinese cultural identity.