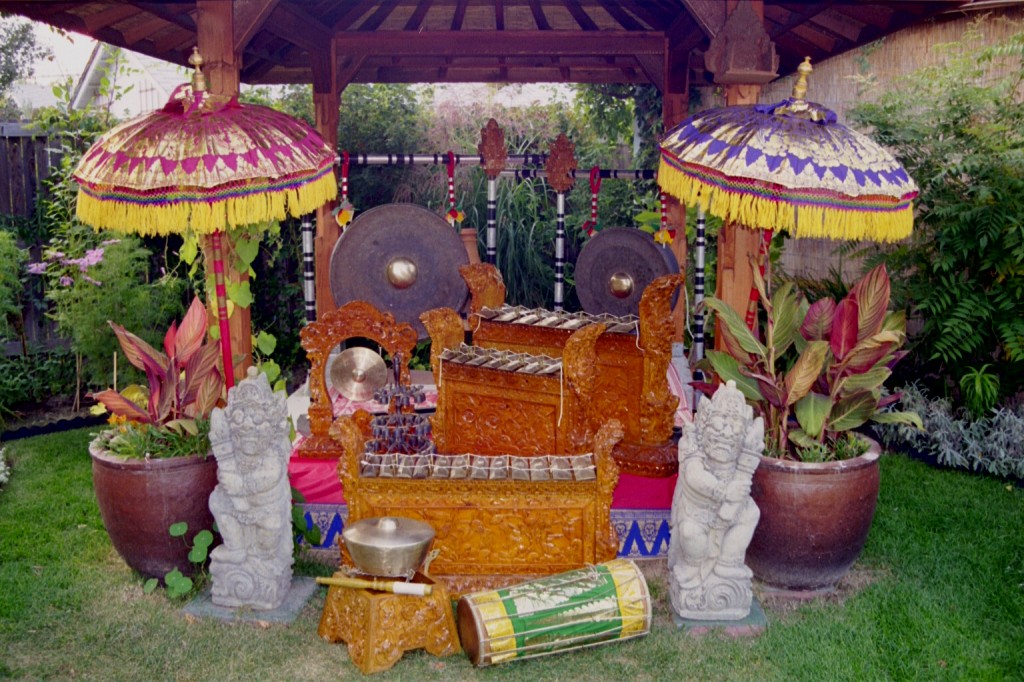 Some of the instruments from Gamelan Tunas Mekar’s Semaradana orchestra. Photo by Aaron Reedy.

Gamelan is a primarily percussive music, the word itself being taken from an ancient one meaning “to hammer.” Bronze-keyed instruments and tuned gongs are struck with various wooden and padded mallets in interlocking flurries of sound. Supplemented by double-headed drums and bamboo flutes, the shimmering sound of gamelan accompany everything from secular dances to shadow plays to the most sacred temple ceremonies. Abrupt changes in tempo and volume mirror significant events in the accompanied performances for a combined effect that is both startling and compelling. The Balinese will state matter-of-factly that the goal of these carefully choreographed performances is to produce a kind of protective magic.

As American musicians striving to perfect these musical forms, Tunas Mekar’s members can testify that magic requires practice. Memorizing pieces phrase-by-phrase without notation, Tunas Mekar has built a repertoire of traditional and contemporary works that the average village gamelan would be proud to claim. Whether in rehearsals of performances, Tunas Mekar’s members work voluntarily in the spirit of community and shared artistic joy that is the hallmark of every Balinese group.

Visit Our Instruments for more detailed information about the various orchestras with which Tunas Mekar performs, and listen to pieces performed on them.